Don't Give Me Any of That Lip!

Well, besides a temp in the hi-30s with a wind chill where you can almost see the frozen flag snapping on the pole at McMurdo Station -- working outside is nice. I get to live in the world when I go to work, instead of just inside a cubicle. I'm so impressed when every lane is filled with people (2 and 3 per lane!) at 6 a.m. and they not only get out of bed when they hear the wind howling, but shed off their warm clothes and plunge into the Laney pool.

Of course there are drawbacks. The Nimitz freeway is a raging mass of road rage, the elements are just a little unpleasant, but the UV rays are bad news. Twice a year I go to my dermatologist and he looks at my lower lip and nose (the rest of my body apparently impenetrable by these rays) and then goes out to the storage room and comes back with a little mini fire extinguisher of liquid nitrogen which he sprays on my lip. After years of this treatment I have figured out the secret formula for how long I suffer after the appointment. Removing these pre-cancerous spots seems to work out to be one week of disfigurement for each second he sprays.

Four weeks ago he sprayed for four seconds and I'm just about wrapping up the latest oozy blister. So that was nice for Thanksgiving. Hi cousins, it's your favorite relative -- Syphilis Marcia!! The first day it is an enormous blister and then it's number-of-seconds-sprayed expressed in weeks-minus-one (blister day) of huge raw oozy open sore. The last two days it shrinks into a little raw lake with a shoreline of scab and then just like the Snows of Kilimanjaro, it shrinks up into nothingness.

Glad it's not a picture day, aren't you? Oh, I found one taken at Thanksgiving but it's suitably far away. This is the Painted Canyon in Palm Desert -- just gorgeous. I can barely remember what it was like to be warm, but I think I liked it. Assorted family members trail me in my ascent of the dangerous peak (not!).

Not that I'm vain, usually, but it teaches you something when you just have to walk out there and wear that lip. I used to work around it with lip gloss, but it never stayed put and was just too much trouble. I also used to explain it to everyone I met, but now just wear it around like some sort of furry sweater. Oh, that old thing -- I've had it for years!
Lesson for today, everything falls apart when you age. But keep fighting the good fight.
Posted by Unknown at 9:45 AM 2 comments:

Labels: Are you happy to see me, or is that a cryogenic treatment?

Another Day, Another Nickel and Two Hours Too Little Sleep

So here's my typical day: wake up at 4:48 a.m. (I used to wake up at 4:45, but found I had too much free time on my hand -- old joke to those who know me) and get ready for coaching morning workout at Laney College in Oakland. After workout ends at 7:00 I come home, pass my husband on the walkway leading to the still-running car and go in to the Crazy House. Inside my 11-year-old daughter is still in the bathroom, and my husband has gotten the daily mess off to a fine start.

After making her breakfast and lunch, and prodding her to eat, brush her hair, find her shoes, get her things ready for school and telling her what the day holds for us, she leaves with her friend Hannah at 8:05. While it's unfortunately still too early to crack open a cold one at that point, I settle for coffee and do my Sidoku.

Anyone still reading at this point? Me too!!! Sometimes I bore myself. Anyway, I got set with the day's computer tasks, which included passing this video around to my friends:
http://www.reuters.com/news/video/videoStory?videoId=65852
Now this is too funny. Okay, so it made me learn where the Dardanelles are, but I still think this guy's a friend of Borat and the whole thing is just ridiculous: people swimming while all four of their limbs are strapped. Why not have them run a marathon with duck-taped legs, or play Mozart with their hands tied behind their backs? Can you imagine this happening in America, land of the lawsuit?

ttfn -- off to practice driving my car through the flaming obstacle course while blindfolded.
Posted by Unknown at 3:34 PM 1 comment: 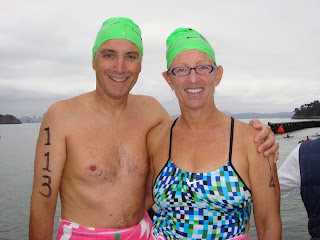 Well that was fun!

Worrying the night before about the cold, the sea creatures and the aloneness of the Bay wasn't the optimal preparation, I'm pretty sure. But as it turned out the aloneness only hit once and the Bay wasn't really that bad. Never saw any sea creatures, either.
We took the ferry over to Angel Island and walked a few hundred yards to the beach for the start. I still can't believe I forgot my socks. After the swim I kept thinking I had a rock in my shoe, and as it turned out I'd cut my foot somewhere and it was open and bleeding all over the place. I'm not sure if the cut came in the walk from the ferry or the walk after the swim, but I'll never forget socks or flipflops again. 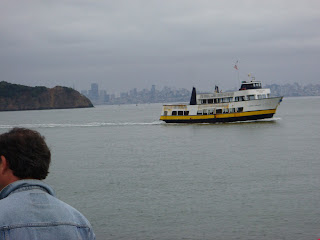 Riding over on the ferry with Larsen Jensen, Klete Keller, Chloe Sutton, and the entire Cal men's and Stanford women's teams was probably the best part. How cool was that to be one of them -- at least for the boat ride.

First swim I've ever done without any warmup at all. Without any towel or parka at the start (everything had to be left in a bag on the ferry, to be returned to us at the finish) there was no way anyone except the Wetsuit Weenies would warm up. So I tried to just take it long and strong for a hundred strokes. The problem with that is for the first 200 strokes it was crowded and there was a lot of banging. 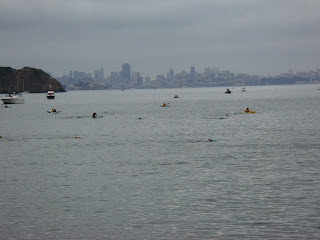 After a few minutes, clearing the cove at Angel Island, I found myself between packs -- alone in the open ocean. I started working harder to catch up to the lead pack, but that didn't work out. I'm not sure that it would ever work out, now, but it seemed like a pro-active stance at the time. Then I took a breath and saw the Golden Gate bridge from a perspective that not many people in the world have seen: water-level. That made me smile and get through the creepy feeling.
Soon I saw the breakwater at the Tiburon cove and got into some packs again. People converged from all sides (where were they?) and we ran up the beach. After that we had to get off the beach -- about the size of my backyard -- and swim between the pilings of a pier to a landing with ladders where we exited and walked up a ramp to the gathering of spectators. Fortunately I found Miriam, who walked with me and helped me find my bag from the ferry. The 10x10 beach and the trans-piling heads-up treading water swim in the murky brown goo wasn't exactly what Pacific Masters Swimming would approve if it were their swim. I'm pretty sure that United States Swimming wouldn't like it too much either (especially for their American Record holders and National Champions), but RCP can do whatever he wants in his RCP Tiburon Mile. I survived. 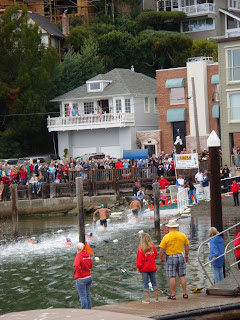 Of course it's six days later and my cut is still open, but I survived.

Pool closed this week in San Leandro where I train, so I took that as an omen and took the week off.

Posted by Unknown at 9:57 AM No comments:

Finally, the last person standing has started a blog. At least I don't have a camera strapped to my head and live in a house filled with crazy people. Oh wait, I do live with crazy people but it's okay because they're my family. Thought I'd write randomly to talk about my life at the pool -- Laney College in Oakland, California to be specific. While I do that I can't avoid talking about my family, friends, and swimming in general.

Today is a typical day for me: swimming stuff waiting by the door, but I have dawdled too long at the computer so will have to bail on exercise this morning. I'll try to catch it later after my 11:00-1:00 class. That's the problem with the self-coached swimmer, if you don't have a scheduled time where people are waiting for you, it's hard to make yourself get up and go.

Big swim this weekend, the world-famous Tiburon Mile. One word for it: "cold." No wait, "hard." Or maybe "frightening." Funny how those aren't mentioned in the flyer.

So here's what I see when I'm writing, my faithful companion Flutter. 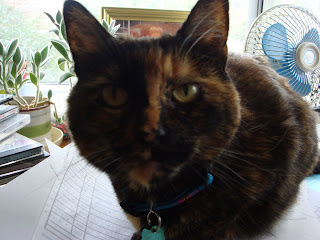 She hangs out on my lap until something irritates her and then sits on any papers I might be using or need to use. I know I'm sounding already like Crazy Cat Woman, but this is really a good cat. I also see a wildly cluttered room (sign of genius), the street I live on (because the computer is in the corner of an upstairs room), and all the neighbors' comings and goings.
Life here in the 'burbs appears mainly to consist of people walking their dogs and the guy from the bike shop down the street riding back and forth on test drives while looking down and not forward. Oh, there is the old lady down the street neighbor who takes seven minutes to back out of her driveway.

Enough for today. Go out and exercise in my name.
Posted by Unknown at 10:00 AM No comments: