Lap Me and Lap Me Again

I remember my wake-up moment like it was yesterday, or better yet -- today, when I actually woke up. I was swimming with my team, Lamorinda, and we were doing our monthly test set: a timed 3000. My swimmers today think a 15-minute swim is bad, bu

t this was something even I dreaded. I was in Lane 6, the Distance Lane (thus my car's license plate), in Heat 2. We six swimmers had counted laps for the swimmers in Heat 1, and now they were doing the same for us. I was next to Laura Alonzo, a Junior National qualifier in the 50 free and 100 back. While I was the "old lady" of the team, 30 years old compared to the pool full of high school kids, I was one of the better endurance swimmers. One of my proudest moments ever as a swimmer was the 12x100 I did once in workout, on a 1:30 interval, with all of them 0.3 seconds apart.

A couple years after thi 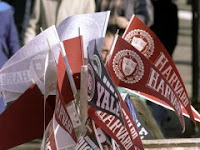 s swim Laura went to college at Harvard and then to Med School at the University of Pennsylvania. Now she does diabetes research and is a professor at Pitt -- all of this info just to clarify that even at 16 she was really, really smart. Not the kind of gal who had no freakin idea how many laps she did (which I hear routinely), or someone who would say "crawlstroke," (ahhh, you're killing me here!), or the kind of swimmer who leaves two seconds early, does illegal turns, and is incapable of holding her breath more than four strokes (roll call: Present!). No, Laura was mature and incredibly talented.

Laura and I didn't do the same sets often, but I felt that I could hold my own with her on the freestyle sets. When the 3000 started she moved ahead early. Like a true distance geek I was checking my 100 times on the paceclock while I was swimming, and I was consistent. In those days I could repeat 1:12s or so all day, and oh man are those days LONG gone! Just typing this makes me and drool uncontrollably as I suck in my gut and try to curl up from my stoop. Laura was holding around 1:06s and lapped me every 24 la

ps. When she came close I'd try to hang on and pick up the pace, but she soon blew by only to reappear exactly 24 laps later. It was like Wet Groundhog Day. Every 24 laps I couldn't believe it all over again. Every single 24 laps she came by (that's 120 total, for the math-impaired), never slowing, never tiring, always in the exact same passing place. I was getting more and more frustrated: hey, I was the distance girl here -- how could a backstroker be putting up such a beatdown?

Finally she finished, and I was forced to endure the most humiliating 250 yard solo swim ever. I think she warmed down, staying in the pool till I finished. She could have showered, changed, done a few calculus homework problems, and whipped up a souffle, but thank goodness she didn't.

I had to take a super serious look at myself that day, wondering what the hell I was training for, when a backstroker (okay, one of the top 50 high school backstrokers in the United States, but still!) could crush me like a grape. I didn't have any answers. If only I had a scoresheet that listed "poor technique," "old age," "mental lack-of-toughness," "no kick," and "feel for the water," I could have selected some really good answers.

Brooding about it for days, I finally asked my coach, Ray, to explain it to me. He said, "Marcia, sometimes people are just more talented than you are." And I thought, whoa -- that was deep -- because that had never even occurred to me. I thought that all hard work pays off kind of soon, or soon-ish. But in reality that's just not going to happen as often as it should. Sometimes there's a Laura Alonzo waiting to run you down like a unlicensed guy at the wheel of a WalMart semi, playing Words With Friends on his cellphone.

Anyone can be a good winner, or their coach. But it's a lot harder to lose or be that person's coach. And today in my daughter's high school championships, as a mom, it's hard to take a sobbing 14-year-old in the shower, hold her close and tell her it's going to be okay if you haven't experienced it yourself. While I eventually did beat Laura in my best-ever 200 free at a meet in Texas (one time only, and she must have had some disease which she later went on to find a cure for), I learned way more from the 3000 than that victory. And the next time my daughter does a best time, I'm sure it will be even sweeter because of what happened today.
Posted by Unknown at 8:28 PM 1 comment:

Dress for Success . . . in Swimming

Besides hunting free-range bison and weaving baskets from reeds I gather myself, part of my weekly chores in San Leandro involve going to a little organic dry cleaners, aptly named "Organic Dry Cleaners." The sweet young Korean owner, maybe tardy a few ESL classes, is always behind the front counter. The other day she said to me, "Ooooh. New style in shirt!" It was about 70 degrees and I was wearing a print top, which I'd pulled out of the closet that morning after months of wearing heavier clothes. She continued, "Usually say 'swim' on shirt!" 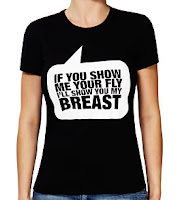 I have devolved now to wearing swim t-shirts and/or swim sweatshirts with my jeans or capris on a daily basis. I do not, however, own the shirt on the right.

When I was a high school athletic director I was involved in athletic governance at every level I could. I organized our school's teams of course, but I worked at the league and section level as well. Meetings, meetings, meetings. The AD dress de jour was a warmup suit (matching polyester pants and jacket) with a polo shirt underneath. As I was clearly moving up in the world I always wore dresses or suits, makeup and jewelry at those meetings. That's right, you're still in Marcia's blog! I really did. Dress for one level above your current position, they say. Why I would have wanted to be League Commissioner and go to 750 playoff games each year (including thrilling 24-20 Varsity Girls Basketball games) was inexplicable.

After I left the AD job I moved on to coaching swimming exclusively. My dressing up was then limited to awards banquets (perhaps "banquet" is too strong a word for lasagne and green salad) once per season. After my last college coaching gig ended I have stabilized here at the Masters coaching and college teaching plateau, where dressing up is never required. But as I still compete occasionally, and those competitions usually come with free t-shirts, I have been accumulating many swim couture items. So, I wear them.

My daughter, a freshman in high school, dresses exactly the same. My first thought is 'Whew! Saving some money here!' and my second is 'Dang, she needs a little exposure to the effort it takes to be a grown-up.' It just about killed her to get into a skirt for her Bat Mitzvah, and she begrudgingly wore a cotton skirt and white blouse to every Bat Mitzvah party she attended, oblivious to all the other seventh-grade girls wearing size 00 miniprom dresses and heels.

She comes from a decade where casual rules (and that would be squared because we're in California), and because she's so comfortable being a jock she wears the uniform

with pride. Many of her swimming buds dress the same way, but there are plenty who do the whole Hollister/Nordstrom's thing. I've seen really good swimmers do an entire 5000-yard practice with mascara and eyeliner. Like you need eye makeup when you're half-naked and wet with three high school sophomore boys in your lane.

But I guess she'll figure it out when she needs to. I do dress up occasionally (anniversary, Thanksgiving, Passover, and the occasional trip to the Grand Jury -- wow, that's more than I thought -- but not so much. I'm confortable and happy. So is she.