There's a picture in my dad's bathroom about the Stages of Life. It shows a series of pictures of a male, first as a baby then young child, etc., etc. by decade until the man is tall and straight. Then he starts drooping, curling back down, leaning on a cane, etc. until he's got a long white beard and looks a little like he's missing his wizard hat from Harry Potter. Not sure why it's in the bathroom, actually, but by now it is kind of creepy-familiar.
I think there is some kind of sporting equivalent in life.
First there is the fascination for riding things, then the ball obsession, then in their Thirties everyone seems to be obsessed with Triathlons (more about this in a minute). In the 4os women are near-magnetically attracted to the treadmill (unless there is a Stair machine), while the guys retreat only to two machines in the weight room: bench press and rowing. In the 50s it turns into Stretch Class and then before you know it you're poofing a balloon around in the Rest Home.
Now one of the benefits of swimming is that you can do it exactly the same for all of your decades. I tell my students that the stroke is like the golf swing. You work on perfecting it all of your life. No one gets it right. We just hope that each year there is some new technological improvement in the lanelines or the swimsuit or maybe a rule change for the start or turn so that we can avoid the physiological 1% decline per year and at least stay the same. Well, I think about these things.
But people who don't grow up swimming like me, people who ride scooters as preschoolers, play Little League and CYO basketball, maybe swim in the summers, try High School track and take up jogging when they get their first real job -- they are the people who are ripe for Triathlons.
It helps if you don't have kids (or have a really cute one who doubles as a BabyGap model and enjoys catching big air as you power through your workout with the wee one in the $600 jogstroller) and have disposable income. Triathlon seems to be the ultimate physical challenge for all people who honeymoon in Fiji, drive expensive 2-door cars, and go to parties when it isn't even Christmas (!!). 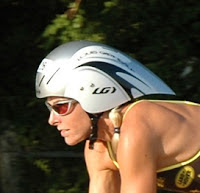 New triathletes in their 30s are always two things: people who just meet the above criteria, or injured runners. The runners are so endorphin-addicted that they get in the pool to "stay in shape" and then figure out that there is a big Fill-In-Disease-Here Triathlon coming up in June and, what the hell they were going to buy a $3000 bike anyway. Pretty soon they look like her (right) when they go out for a quart of milk.
They hate doing anything but freestyle (why are you wasting my time!), hate drills (let's get going!), hate kicking (I run, you know!), hate sprinting (it's a MILE, you moron) and hate using fins (we can't use fins in the lake). All of those things are exactly what the triathlete needs for their stroke, of course, but getting them to understand that is tough.
So it's my job to teach everyone, and I do, but if you're going to do a triathlon, at least make it a reasonable combination of sports. I think that the current ratio of about a hour swim, four-hour bike ride, two-hour run (give or take 10 hours each way) for the Ironman length and the same ratio for the Olympic distance is entirely LAME.
If you want to see well-rounded people why don't you do a two-hour swim, run and bike. Make the Olympic length a one-hour swim/bike/run. This new Marcia Triathlon would be completely reasonable and make your strength be in having no weaknesses.
Now if you're a lousy swimmer and swim 50% slower than the rest (imagine driving at 30 mph on the freeway, while everyone is driving 60), you are behind all of 15 minutes as you get on your bike. Then you still have three hours to make it up. If you were behind 50% on your bike you'd only have to run the 10K in minus 20 minutes. Half-speed in swimming is nothing in these Disease Weekend Triathlons. In the pro events everything matters, but for most of the people out there -- no.
Remember you heard it here first: the Marcia Triathlon. No disease required.

Posted by Unknown at 9:26 AM No comments: