I vote for normal.

I just came back from watching my husband and daughter swim at Lake Berryessa this morning. There were hundreds and hundreds of people swimming, broken up into "waves" of categories which allowed a more manageable pack. I first did this swim in the early 1980s, when they had free beer after the swim. The Bureau of Land Management doesn't seem to have such a joie de vivre attitude these days.


The swim is just a goldmine of money for t 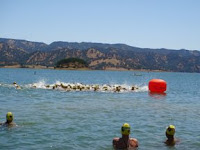 he Davis Aquatic Masters, who sponsor the swim. Going to their webpage I saw that they were taking a team trip to the Galapagos Islands. That's nice. One of my teams once went to Fentons.


And then there were the Wetsuit Weenies. They get their own wave.


Because of the sheer volume of people, swimmers were asked to arrive an hour early, which my husband always hears as two hours. Dragging his poor family up at the crack of dawn (I only enjoy that when I get paid to coach my 6 a.m. workout at Laney College), we set off on a breakfast-churning, winding Napa road.


In the free time I had, I saw dozens of swim pals and even found myself sitting next to the dad of a girl I coached in high school in 1987. Yikes, I even recognized him. Everyone looked like they were enjoying themselves and seemed to know what they were doing. Except for the Wetsuit Weenies. They were changing into their blubber suits and then looking around for another neoprene addict to zip them up. Hey guys, where's the BatCave??

My husband was in the third wave starting the two-mile race (men and women, but not kids, also had those same categories for a one-mile race which followed). After the fourth wave the Wetsuit Weenies went off. The lake was about 70 degrees, 95 percent of all attendees were normal, non-Weenies (even the 9-year-olds), and there was no carbon bike to leap aboard after the swim. What gives?


They were either training for a triathlon or just true, world-class Weenies, who probably sit with a little crocheted blanket on their laps when watching movies set in autumn. Even worse, after they get out of the water, they then have to find someone to unzip them (help me please sir, I can't get dressed or swim on my own . . .) Then they walk around with the top half of their wetsuit folded down looking like they've begun molting, or somebody scratched them with a coin to reveal the prize underneath.


Another thing that really bugged me was the fact that a local youth swim team brought a group of swimmers out to this event and then the coach SWAM ALONG with the kids (not even the 10-Unders, for cryin' out loud!!) so that they would feel comfortable. Hey, it's OPEN WATER swimming, not Follow The Leader. If you want to feel comfortable PRACTICE. Duh.


Everyone has to learn what to do when they swim and, assuming it's not some sort of event which involve parachutes or crocodiles, you should learn to figure it out for yourself. That's what LIFE IS. Duh again. 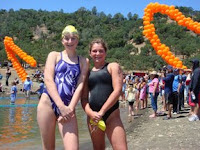 My daughter did great, 4th in the 11-12 age group behind a pair of twins that are turning 13 in a few days and her superstar pal. My husband finished in the top half of his age group, undoubtedly failing to crack the top 10 due to his lack of sleep.
Posted by Unknown at 6:44 PM 2 comments: