It's good to get out, once in awhile. It's not that I miss picking up after the family (no way!), or making lunch, or doing laundry -- which is kinda like a dream job. But when I got the chance to be on the coaching staff of the Western Zones All Star team in Grand Junction, Colorado, I jumped. It was six days of coaching, small talk, meetings, nagging, chaperoning, bus and airplane riding, and lots and lots of waiting. It was six days of the world's worst food too, but eating to win wasn't quite as important for the coaches. 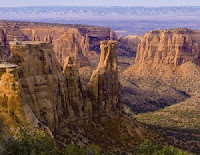 The meet is a competition between all the United States Swimming All Star teams located in the West. There were over a dozen zones present (California has several, while some other states combine to make one); I was with Pacific. The host team Colorado won, beating us narrowly, 1,543-1,536.5, due to their superior altitude lungs (Grand Junction is 4,593 elevation). I was in charge of Pacific's 13-14 boys, a hardy subgroup of humankind that eats vast quantities of anything on plates, napkins and/or carpeting, and loves superheroes and the thought of girls -- but not actual girls.
I spent a little of my free time going from Zone to Zone, recruiting for next year's Maccabi Games in Israel -- where I am also coaching. That is a meet for Jewish athletes, and more about that in another post. But I'd go up to all the coaches from the other Zones and ask if they had any Jewish kids that were fast, who would consider applying to Team USA. Let's just say pickings were slim. One lady from Utah (in retrospect, that was a longshot) actually knew a Jewish swimmer, which made her quite pleased. So there were no Jews, no non-Whites except for us, and no Peet's Coffee. I was the only married coach from Pacific and the only one with a teenager. My roommate just graduated from college.
Grand Junction was very hot and surrounded by the beautiful uplift known as Colorado National Monument, though we were inside at Colorado Mesa University. We got a few short tours of the area by our bus driver, a budding and yet terrible tour guide named Charlotte. Other days we got the near-toothless Crazy Man bus driver, who on the last day hugged all the kids while I watched horrified from afar, like seeing a car go through a plate glass window. Colorado is also one of the big "swing states", and we were blanketed with advertising for both presidential candidates. A Romney bus was parked in our hotel parking lot a couple of days, but I'm pretty sure it was just filled with staffers, because even one bite of those eggs would've brought his campaign to a quick end. Obama also flew into town while we were there, delaying the Crazy Toothless Man bus.
Like most of Pacific Swimming (and team Hawaii), my group was predominantly Asian. Living in the Bay Area and teaching at Laney College, it felt normal. All but two of my daughter's friends are Asian, and except for her current obsession with all things British, she is a future Asian history major (sigh). My group of boys was super-Asian, as they all could do all the things that one ever sees Asians excelling at. Swim fast -- check. Build computers -- check. Play Hayden, Mozart, Beethoven -- check. Take pre-calc in 8th grade -- check. Rubik's Cube under a minute -- check. Quiet on the outside, party on the inside -- check. Those are so my-kind-of-people I could just weep.
On All Star teams you get a pile of free clothing which you wear in a rotating order, like attending an incredibly fit Catholic school without having to roll up your skirt. We'd go to breakfast wearing the shirt of the day, where we'd see the same "eggs" in the chafing dish, and then gather in the lobby before boarding the bus to the pool. On the way to the lobby was a baby grand piano where, on the red-shirt day, one of my boys sat down and whipped out the first movement of a Mozart concerto. As we walked to the bus I asked him if he'd studied the Suzuki method, as my daughter had when she learned to play violin. He said not for piano, but he did with the violin. So that's nice that he can do both. And be at the freakin All Star meet. 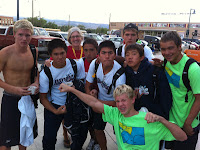 The next day (blue shirt) saw the same eggs and same walk to the lobby. The junior Mr. Rubik sits down and plays something equally majestic. However, he doesn't also play violin. In school he sits first chair clarinet. On white-shirt day yet another kid sits and plays equally amazingly. He's the one in pre-calc. He finaled in all his events. To be fair, I did have a couple of non-Asian kids, one of which was a budding frat boy inside a 6-2 frame, with phenomenal good looks, and the other two were loveable dorks. But the quieter kids are just easier for me to relate to.
Due to a weird bit of scheduling I was on different flights in and out of Oakland from my 13-14 boys. Who wouldn't like to report to OAK at 3:30 am? And sign me up for the fabulous 10 pm return flight, when my real family and I were leaving for vacation 11 hours later. I didn't have any laundry to do when I got home (red, white and blue Pacific Swimming shirts were not so valued on vacay), but I had to water the plants outside in the dark, check the home answering machine, and make up some quality cat time for a few hours. Did you need to save all the junk mail for me, really? And the rubber bands from the morning paper?
In Hawaii I did miss the 13-14 boys a little, though I was glad to be back with my real family. We did take the bus around the island, but no toothless crazy man was at the wheel. The only sign of politics was the bobblehead Obama doll wearing a lei and beach clothes, giving us the hang loose sign. No one can sit down and play piano concertos in my real family, but the breakfast was way better. And it's back to the home team.
Posted by Unknown at 9:05 AM No comments: