I've Turned Into That Weird Guy With a Clipboard at Safeway

I've been spending the last several weeks emailing, and texting, and posting, and chatting up all my current students and past students and teammates, in the hopes that they will enter an upcoming Masters swim meet.  I'm getting tired of hearing myself at this point.  But it's just amazing to me that people don't want to compete. 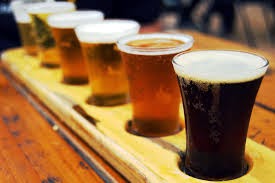 I know, ex-swimmers.  It's been years and years, and you've moved ON.  I hear you.  But for those I am trying to seduce, coming back as a Masters swimmer is all of the fun with none of the pressure.  People don't warmup, they scratch events, they go out drinking during the meet.  They buy an expensive racing suit that they squish into after missing every other practice for a month, and every other month for a year; or they don't even bother and wear any old suit that's hanging on a doorknob or on the shower curtain.  They bring their distracting kids or spouses to the meets, they lay in the sun between events to catch some rays, and they even get disqualified because they haven't paid any attention to the rules since 1988.  And no one cares!

Imagine going to school like that -- miss the first five weeks of the semester, then wander in late during a test and just draw pyramids in the margins and write A-B-A-B-A-B in the answer key.  The teacher invites you out for a beer after Section 1.  You go!  You can't recite the book from heart, but you are in the Top 2 percent and everyone thinks you're Neil Degrasse Tyson because you're cool and smart and just know stuff.

That's what it's like now for experienced swimmers.  It's like the sport you know, but with 6-foot baskets.

are watching you, staring at you all the time you're swimming -- they're either laughing or crying with laughter.  How many laps in a 200 again?  Do I have to dive?  Why do I have to go to the bathroom every 10 minutes?  It can't be 10:30, I've finished my lunch already.  When will this hell be over?

I get it.  But it grows on you.  Oh some people bang out an email or five on their phones, some can't wake up early on Sunday and just pass.  But after a few meets you learn to enjoy the slow movement of time, interspersed with moments of action like it is when you watch a baseball game.

The ex-swimmers have moments where they can't believe their once-proud physique has been reduced to a shapeless blob, and the days of fitting into a 28 are so long gone that one leg would need a good greasing just to accomplish it.  But hearing the sounds and the laughter, and the cheering from their teammates brings them back to a happy time.  For the ex-swimmers it was when they were young and strong.  For the new swimmers, it's a chance to challenge yourself with a new skill.  You WIN ribbons, rather than get handed a finisher's medal.  That is pretty dang impressive.

And everyone can agree that a beer and some food sounds really, really good after it's over.