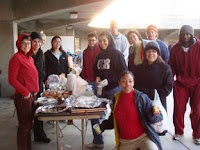 You'd think that people who wake up early to get to my workout at Laney College by 6 a.m. would be there for the exercise. You'd think that exercise would mean the same thing to most people. Well, no.

Exercise means several things to my Laney Gang. (Here's my chance to use my Masters Degree and use bullets!) See where you fit in!

Is the Pool Heated?

It's not like we're in Kazakhstan, with a mixture of semi-treated sewage and rainwater filling a concrete rectangle left over from a Soviet tank doing doughnuts. The NCAA rule book states that the water temperature must be between 79 and 81 degrees Fahrenheit for competition. So, that's what people set their pools to for practice. It's just the air temp that's a problem. It isn't even that cold. Check out my favorite Antarctica video:

I like coming home from coaching morning workout at Laney College and seeing the roofs of the houses covered with frost and the occasional chimney gaily spewing chunky, asthma-inducing particulate. When I drive in each morning everything is dark and I just see the empty streets.
Occasionally in my neighborhood I see a bathroom light on or the papermanboy, but not much action. If I leave four minutes early I also see my neighbor Ed, who drives his El Camino off to work while wearing his "Ed" shirt.

Since I work at Laney, I wonder if I can get a "Higher Ed" shirt?

I like leaving early, on those rare mornings when I don't have to fold laundry or put away the dishes. Then I get to stop at Starbucks in the Fruitvale neighborhood, selected because of its easy-on/easy-off access to the Nimitz freeway and not because I'm a corporate lackey. I was just saying that very thing to my friend as I was driving my Audi R8 to Bloomies to get a new Juicy bag when my iPhone went off.

When the temperature is not in the 30s, I wear my Laney jacket and everyone at Starbucks knows I'm coaching swimming. When I wear my double layer warm jacket I just look like I'm off for a day of Search and Rescue and no one admires my toughness any longer.

The crowd at 5:40 a.m. at Starbucks is entirely composed of tradespeople and law enforcement officers. Occasionally there is a woman who is in one of those categories, and sometimes there is someone dressed well -- off to a busy soul-less day at the office -- but I like the amazingly bilingual staff (how cool would it be to be that fluent) and embarrasingly enough, I like how they remember my order.

Then it's on to the pool, where it's always between 79 and 81. Yeah, I'm tough getting up that early to work outside. But my swimmer are even tougher. They don't get paid. I wish they could get extra fast because they come to the pool on days like this, but life doesn't work that way. I hope they know how -- each time they get out of their warm bed when the alarm goes off -- they are becoming stronger people. It fills me with pride to see how many people show up on the cold days. Thanks for warming my heart!
Posted by Unknown at 9:30 AM 2 comments: