So You Think You Can Swim!
Well, you're soooooo wrong! You think swimming is moving . . . in water. Any way at all.
I don't. I think it is side-breathing, putting your face all the way in. Owning goggles. Not being exhausted from warmup. Not getting out to

fix your cap, cough, or rest. But most of America doesn't see it that way. The people in my swim classes at Laney College are REAL swimmers (at least they are now, after we all went through hell together -- mostly my personal relentless, blood-pressure-spiking hell) But each semester I have at least three or four who think they can swim but have absolutely no freakin idea what that means.
They swing their head side-to-side, out of the water. They borrow goggles the first day. (That's my deal-breaking question to see if they belong in my class!) They swim as fast as they can -- the first lap. They say they are good swimmers, except "for breathing." Red Flag!!!
I don't even like the way people swim on those Senior Citizen medicine ads. Denture cream, Viagra, Celebrex. You name it, if old people need it -- they show happy soft-focus active seniors swimming laps, wearing ginormous goggles and sensible suits. But they can't swim! Really, if they wanted good senior citizens could you please just come to a Masters National Championship and pick like anyone! I'm just offended.
We got back from vacation at Pinecrest Lake a week ago. It was just a beautiful, perfect swimming lake. Water temp in the low 70s, clean and clear, all fish scared away from my daughter's futile attempts to reel them in, and uncrowded. People trooped down to the shore from their cabins, townhouses, or camp sites each morning. They were dressed like swimmers and carried the gear swimmers might need -- but when they got in, they were so delusional I thought I was at a Republican Empathy meeting. A few people tried to make it out to the lane line which designated the swimming area -- and had to hang on in exhaustion after . . . 25 yards.
One dad, who swam heads-up like Tarzan in the early movies -- except that Johnny Weismuller was an actual Olympic Champion, and this guy was a idiot -- actually tried to teach his son how to swim. It was all I could do not to get up and slap him silly. Must read magazine. Do not look up. People come up to me all the time and ask me "how to swim," like I can tell them that magic thing in five minutes and voila! How do you land that Space Shuttle again? Oh, okay -- got it! 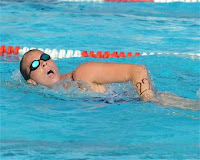 Mark Twain wrote: "Noise proves nothing. Often a hen who has merely laid an egg cackles as if she had laid an asteroid." And that was this dad. Loud. Insistent. He went on and on about how to move your hands, how to kick, where to look. All wrong. Every word.
And surveys come out saying that 39 percent of Americans are afraid to put their head under water. This guy must have considered himself one of the ones who Knew How. So many people think that if they can get through 25 yards or put their head completely under water, they can swim. Once again, I'm offended. I admit it, I'm a swimming snob. But please learn from a real coach. And stay out of my lake, it ruins my vacation. And I worry about you.
p.s. first picture is GOOD; second picture is BAD. Duh.
Posted by Unknown at 5:51 PM 1 comment: