This was a license plate one of my teammates used to have, back in the day when I was fast. Aaron flew by most people, especially moi, because I hadn't figured out how to swim butterfly easily, even when I could break 2:00 in the 200 freestyle. Now my butterfly is easier -- still not fast, but easy
-- and of course he can still fly by me. So what has really changed in the grand scheme of things: nothing. 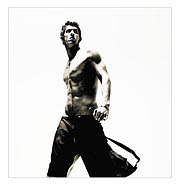 Butterfly is so hard for so many people,
but not so much for this guy (right). You may see more of him in the upcoming months. His website is conveniently divided into English and Chinese. As for the rest of you . . .

Woody Allen wrote so many funny lines, but one of my favorites is "I am two with nature." That's what most swimmers' butterfly looks like.

When I first started coaching, I was co-coaching a Masters swim team with my pal Janice. There was a guy, Steve, on the team who always substituted freestyle when I said butterfly. First I guessed that he didn't hear the instructions, so I repeated it. Next I figured that he didn't know how to do the stroke, so I offered to give him a few tips. But he told me that he just didn't want to swim it. When I asked why, he told me the funniest thing: "I just don't like the look on people's faces when they finish." And it wasn't even like he didn't want to work hard. He worked on freestyle sets, and was even fairly competitive. Whatever. Our coach-athlete relationship became a little less coach-y after that.
This week we had a great workout that featured hard freestyle alternating with six 25s of butterfly. Just enough butterfly to tire you out before the freestyle began. Then, when you finally made it through the freestyle, it was time for butterfly again. I love the devious sets. Everyone had that same look on their face that Steve was missing. It was beautiful.
Everyone is so nice to me when they're done with that set or one like it, it's like they've just been rescued from a well. What a great phenomena to have people say "thank you" after you've just caused them pain. I love my job.
So here's my latest complaint: sixth-grade English. Why is it, when someone's advanced they are forced to peer tutor? Just because you know something doesn't mean you know anything about teaching. That's why people have to get TEACHING credentials, for cryin' out loud. My sixth-grade daughter doesn't need to learn how someone else learns and to work with their strengths. The other sixth-grader doesn't need to hear from the geeky kid in the seat next door, who can barely control her eye-rolling muscles.
In swimming (where the world is pure, and life is good), if my daughter is faster than the other kids, she gets her own interval. She doesn't have to stop and look underwater at the kid in the next lane. Hello, we have a coach! Why can't someone in education challenge my daughter? Is it because they're afraid of stigmatizing her? If they gave her double the number of dorky vocabulary words, maybe, but what if in addition to the See Jane reader the rest of the class was using, the teacher could assign her something, you know, complicated -- and email her or get together for 10 minutes before school.

Not everyone who is a fast swimmer is a good coach. Not everyone who is smart is a good teacher. Not everyone who swims fast or is smart in school even likes teaching. Lucky I was one of those people who was a good observer, interested in the sport itself, and a deep thinker (HA! Two out of three!) Teaching is just about all I do; I run the household like a workout, too. First you hang this up, then put this here, then pick up that. DON'T TALK WHEN I'M TALKING! Yes, I know algebra is hard. IT'S SUPPOSED TO BE HARD. And that's just with my husband.

Oh well, my daughter can be challenged in the pool. So can all of us. And that guy pictured above. Swimming's the best.